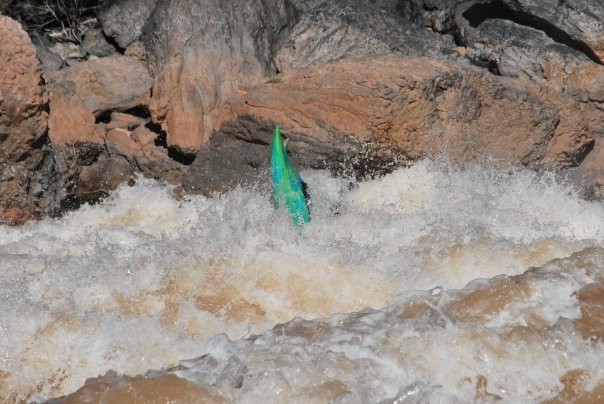 I was talking with my friend Maureen Nolan, who surfs, the other day and we were trying to figure out why it is that people who hang around water are so often really fun to be around.

This is something I’ve noticed ever since I started doing the Washington Kayak Club paddles back in January because, frankly, it’s unusual for me to run across a group of people who I find pretty universally likeable.  I’ve heard other people comment about what a good group the kayaking community is too, and Maureen says the surfing crowd is similar.

So why is that?  I think Maureen put it best when she said that it’s because in the end, “Water always wins.”

You HAVE to stay humble when you play around in water, because no matter how good you are it’s only a matter of time before you receive a massive butt-whomping.

If you think about it, you could be a star basketball player and actually be unbeatable, since you’d always be up against another human being.  But kayakers are always beatable – up against (or at least, playing in) a natural element that is stronger than they are.  Eventually the river always reminds us of that – and apparently it’s really good for the soul. :)

(By the way, Butch Vision, pictured above, is a really good kayaker – I just had to use that photo because it’s such an awesome shot.)

“If you think about it, you could be a star basketball player and actually be unbeatable, since you’d always be up against another human being. But kayakers are always beatable – up against (or at least, playing in) a natural element that is stronger than they are. Eventually the river always reminds us of that – and apparently it’s really good for the soul.”

One of my favorite quotes ever! Exactly! It sure does keep me humble. And I had the same line through Lava…

Thanks Andria! That is funny about Lava – I can’t imagine how big those waves look when you’re actually in there.

I enjoyed looking through your blog and your brief article here. I agree with your friend’s comments. However, as a kayaker and surfer, I generally find kayakers a bit more friendly in AND out of he water than many of my fellow surfers.

Many (not all) surfers tend to be pretty territorial ON the water. Once they get out, they are more inclined to “mellow out” and engage their fellow adventurers in the experience.

In general, I agree that the power of water has a humbling yet calming influence on its practitioners. It may also be, in part, as humans we are composed of mostly water and water is a “natural” element for us.

Keep up the great work on your blog and hope you have great paddling adventures in your future.

Hey Dennis, what you said about surfers being more territorial kind of fits in with what I’ve heard as well – and of course with my vast surfing experience from watching “Blue Crush”. :) Yes, I don’t know what it is about water, but if you’re into it there’s nothing better than being on it and in it – that’s what I love about whitewater kayaking. Thanks for your comments!

Irene – I recently moved from the coast of southern California to Raleigh, North Carolina. So, I will be doing more kayaking than surfing. My exposure to white water kayaking is very limited. I used to sea kayak and surf off the coast of Orange County. Now I am experiencing the joys of flat water kayaking the variety of lakes near my new home. Hope to make some tours out to the Outer Banks east of here and see if the alligators are more friendly than the short-boarders in the line-up at Salt Creek in Dana Point, Calif. (just kidding – a little) — Have a great kayaking season Irene and thanks for your posts.

I love that quote: “Water Always Wins”
I admire it so much, that I made a youtube account out of it which I’ll be uploading my whitewater experiences on to.
http://www.youtube.com/WaterAlwaysWins
I’ll be putting up that POV videos with my GoPro cam from the Pyranha Team day on that channel.

On another note:
I agree with Dennis about surfers. Not only can they be territorial, but I find some of the local surfers to be extremely egotistical and unapproachable. To backup my claim, I was in a local surf shop down in Westport and I couldn’t have been treated worse by the employees/surfers. Never again will I go to that shop. Way to be salesmen and promote return of business of your customers…

Well that link I made above didn’t work so just Copy & Paste it:
http://www.youtube.com/WaterAlwaysWins

Thanks Blair, I didn’t see this comment right away but when I saw the Youtube video from ‘water always wins’ on Facebook I figured it was your channel. I love that Dan Parnell hole surf, I always meant to put it on here too. You are definitely charging, I am really interested to see what you end up on this summer!

I AM CHARGED! I hope to paddle with you again sometime soon Irene. I know you’re predy big time now with the rivers you’re huckin, but when you go down The Sky or equiv runs up to BD level, I am 100% down! I also want to paddle Husum Falls this summer. Is that White Salmon? Can’t remember off top of my head. I’m in a Prius (haha) right now headed to Idaho. When I get back, I will be overdue for the rivers. Anyways, back to getting 45mpg on this road trip. Very blah out here. Poor Brown:Green ratio. Need more trees, bushes, and grass!