April 2009:  I’ve been going on whitewater kayaking trips around Seattle nearly every week since January ’09 and I usually take video, much of which so far has ended up just stored on my hard drive.  Between that and the pictures other people take it seemed like a huge waste to just let that stuff sit around, so I’m starting this blog so we have a place to share it all.

I’ve got a ton of video to go through which I hope will eventually end up on here.  If you’ve got kayaking photos, video or just want to write about a paddle or review a kayaking thing your tried feel free to drop a line to submit a post.  So far it looks like I’ve recruited one guest poster who takes helmet cams (thank you Greg :).

By the way, I’m not an expert paddler, just a Class III-er looking to move up.  A big thank you to the WKC (Washington Kayak Club), I’m not into clubs in general but I have to say they are an awesome group of people who are a blast to kayak with, many are great paddlers and everyone takes the time to help out newbies.

Update Nov. 2009:  I have to add that after kayaking the Skykomish a lot since the summer I also owe a big thanks to the Professor Paddle boaters too, who for whatever reason end up on that river a lot more.  The WKC and the Professor Paddle crowd aren’t entirely mutually exclusive, but there is this odd little rivalry in terms of how they approach kayaking in some respects – it’s kind of interesting.  Anyway, the PP boaters are a blast to boat with and have helped me a lot in terms of improving.  I’m still what I would consider a solid class III paddler so have a lot to work on, but at least now I’m capable of occasionally scrabbling down a Class IV without having a massive yard sale.

Update April 2010: OK, after doing literally over a hundred runs through Boulder Drop (the Class IV rapid on the upper Skykomish run) since last July and jumping into Anderson Hole a bunch of  times I can say I feel pretty comfortable overall on moderate Class IVs, which for me means Boulder Drop up to around 2700 cfs.  I’ve done it up to 3800 cfs, and had a super-interesting (and let’s face it – very fun) line down it in the Jackson 2Fun, my current favorite boat, the other day at 3600 cfs, finished off by a close-up encounter with House Rocks and then a spectacular roll through the wave after that.  (Cruddy line, great roll – an ongoing theme.)  Thus, my most recent post about looking for whitewater kayaking slalom videos, since I know in order to get comfortable in more difficult water and also to start being able to catch micro-eddies  (or, in my case, sometimes even just eddies) like you need to for creeking I’ll have to improve my boat control.  Of course this is all assuming I survive my second go at Tumwater tomorrow. ;) 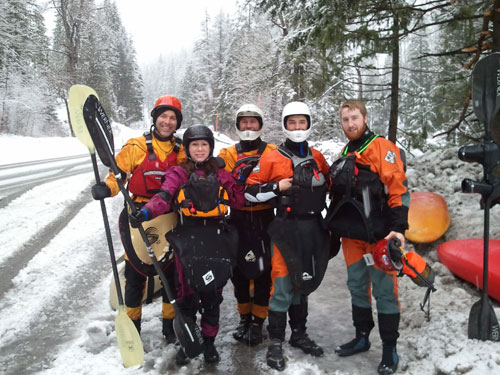 Dave Moroles, me, Utah Sam, a good boater whose name I can't remember, and Blair Williams at Tumwater Canyon, March 2011

I’ve had to take two months off so far after hurting my back in early July, but am on the mend and looking on the bright side – I had some big work projects that had piled up and possibly only an injury would have forced me to stay off the rivers this summer and get them done.  So, I got a big chunk of that stuff rolling, but have YET to do the Cooper River….  Next year I hope!

Anyway, reading that update from April was kind of funny, because since then I’ve done the Sky and Boulder Drop (the main line) at much higher levels, I think tops was 6400 cfs and that was in the Project 45, which is a small boat for that kind of thing – for me, anyway.  However, back in April 2010 I had two successful Tumwater runs, at 1750 and 1850 cfs (did The Wall and Chaos, walked/crawled POW – the river left portage was the hardest part of the whole run – and took out above Exit), whereas this year in March, when that photo above was taken, I hopped onto Tumwater at 1450 cfs thinking it would be easier because it was lower, and totally swam The Wall after missing four or five rolls.  Two other people from that photo swam The Wall too (I will resist from naming names :)) but got out much sooner – I suck at swimming and swam the whole thing.

So then in June Dave Moroles, Jon Dufay, and I did Lower Icicle twice at 7400 cfs (I put in just below that crux move at the start, partly because I was still freaked out from that Tumwater swim).  That first lap I rolled all over the place and I’m sure had an expression on my face like I was being chased by a serial killer, but got my groove towards the end, then had a super solid second lap.

So it just goes to show – I am trying to make some kind of point here – whitewater kayaking is one of those sports that can really surprise you.  So much of it is mental, but so much also depends on building up core skills.  , because you need to be able to roll, brace, and get where you’re trying to go, but at the same time, that first lap on Icicle was hairy primarily because of my state of mind.  If you’re ever on a river and totally scared but you feel like you’re kind of ‘getting it’ towards the end and you have a chance to do another lap, I totally recommend it – if we hadn’t done that second Icicle lap I would not have known for sure that I was really able to do it so much better the second time around.

(OK, since I originally wrote this I read that Mary DeRiemer of Adventure Kayaking thinks that kayaking is, actually, pretty much 90% mental, so seeing as she’s a million times more experienced than I am I’m going to take her word for it.)

It will be odd to get back on the river after a few months off seeing as I was going two or three times a week up until July.  But I had already decided to try for less of a fast track and more of a solid skills-building track so that I can progress while boating in control, which has not necessarily been my strong point.  Now if I can just get to where I don’t have to stagger around for a minute every time I get up from sitting I’ll be good to go.