Team Pyranha Rocks, Demshitz is Fun, and I Do Boulder Drop

Team Pyranha came to town this weekend, and it was a good time all around.  Dave Fusilli, Jared Seiler, Nicole Mansfield and David Space ran the Skykomish with us from River House down (OK, I have to mention, for the record – although maybe not for the last time – the Skykomish run that we did was David Space’s third river in his life.  THIRD.  I give him major credit.) 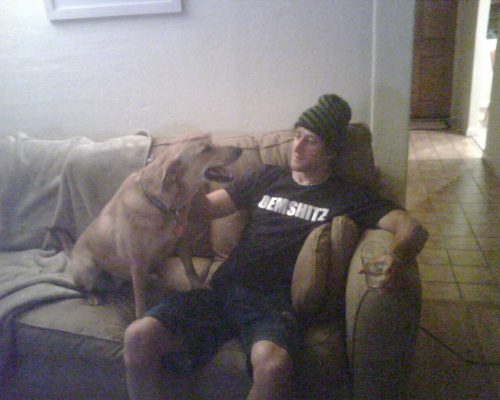 Libby hams it up with Dave Fusilli of Team Pyranha

We put in at the Outdoor Adventure Center in Index on the North Fork of the Skykomish River, and went from there to the take-out at Split Rock.  Cfs was at around 2400, so not too high, although higher than people typically do Boulder Drop for the first time.

Whatever. :)  I’ll be the first person to admit I flip over when a there’s not really a need to, but at the same time I’ve realized that at the other extreme, letting people hype you up about how difficult a run is may not always be helpful.

For example, when I was just getting into Classs IIIs I ran the optional lower Class III section of the Headworks on the Green all by myself because I thought it looked like fun.  It went fine, and later on it seemed harder when I followed people who made a big deal about the lines.  I realize that river levels change, etc. – but I guess there is a fine line between where to be reasonably careful and where to say – ‘Oh, what the heck”.   Based on past experience, I appear to be solidly in the Option 2 department.  (With reservations. of course  – I’m not a complete nut. :) )

Anyway, on the Saturday run we got to Boulder Drop (which is the Class IV rapid on the run) and I watched Dave Fusilli, Nicole Mansfield and Brett Barton throw ends over the entry drops.  I was scouting from land and planning on portaging.  Right when I got back to my boat (feeling crappy about portaging, by the way) I ran into Jared Seiler and David Space, who were just coming down and wanted to scout.

The short version is that we scouted and Jared made Boulder Drop not sound like a big deal, so I decided to do it.  Not that he made it sound like a cake-walk either, but I think he’s the kind of person who’s really good at making things sound reasonable without making you feel like he’s trivializing the Precipice of Doom.  Not a  bad mix.

Anyway, we did Boulder Drop through Airplane Turn and I actually made the drop after Airplane Turn, using a couple of massive high braces.  This is a big deal for me because I historically have sucked at bracing – so I actually felt like some skill (and not just luck) played into me making it that far.

David flipped on the ferry over to Airplane Turn and swam through one of the needle routes – but keep in mind this was his third river ever in his life, so just the fact that he was trying it was amazing.

On the last drop I went a bit to the left of Jared and flipped over in the side of a hole – tried twice to roll, and then swam.  I seriously think I should have gone for a third roll – I was right at the in-between point where I was thinking about it (having decided to swim, then thinking ‘ “But, maybe…”) when my paddle hit me in the face and I thought – “OK, I’m done.”

Fortunately there’s a nice eddy below Boulder Drop, Nicole did the ‘boat-over-boat’ thing that made emptying my kayak look easy (I’m pretty sure it’s not really) and it wasn’t really traumatic.  Overall, I have to say that the whole experience, even with swimming, was so much fun that I could have gone back and done it again right afterwards.

Kayaking down the Skykomish River really makes you think about how fortunate you are to be in a place like that.  Everywhere you look there are big craggy mountains making outlines against the sky, the river is beautiful, and on an 80 degree like Saturday you seriously (especially if you read international news and remember that somewhere, someone just like you is staring through the wire barrier of a refugee camp wishing they were someplace else) have to just thank God that you are fortunate enough to be in that spot, at that time.

After the paddle we met up at AquaSports in Redmond for a viewing of Team Pyranha’s “Demshitz” movie – very fun, and I bought a copy.  I love the movie, and there’s a ton of great footage that makes you think, “Holy smokes, if that were me I’d be dead in two seconds.”  I guess in the interest of being an honest reviewer I have to say that there’s one part in there involving an insect that lost me.  It may seem like a little thing (and no, I’m not a PETA person) but I see those things as kind of symbolic of how we rationalize why it’s OK to treat people, or things, a certain way just because our big ‘why’ is that we hate what that person, or thing, does.  (For reference, see virtually anything related to Dick Cheney.)  I’m sure this seems like an overreaction to most people, but for me, it isn’t – so I’d be a hypocrite if I didn’t mention it.

See, now you’ll have to buy the movie to figure out what I’m talking about. :)

Anyway, it’s an extremely fun movie – amazing waterfall and huge rapid stuff, and Jared told me he and another guy are responsible for the time-lapse footage, which I think is really well done.

Charles at AquaSports hosted the movie event, including $50 worth of gear plus a free T-shirt for attendees – nice!   People walked out with big smiles, and Team Pyranha ended up staying at my house overnight.  They are a really nice group of people, and great house guests – I actually felt like I ignored them this morning because my face was in a computer for 5 hours, and then I pretty much blinked twice and they were gone – with all their dishes washed behind them.  So if they’re in your neck of the woods and you have the means to put them up, they’ve got my two thumbs up.

Umm… did I mention that this was only David Space’s third time on a river? :)