Saturday was an awesome time on the Skykomish River, running from Cabledrop to Big Eddy.  Kiran Bhageshpur (who also has a whitewater kayaking blog) organized the trip, a bunch of people showed up, and it was remarkable in that:

b)  One member of our group, Stephen, was a new paddler whose only previous river experience was the Class I/II run from Big Eddy to Monroe. 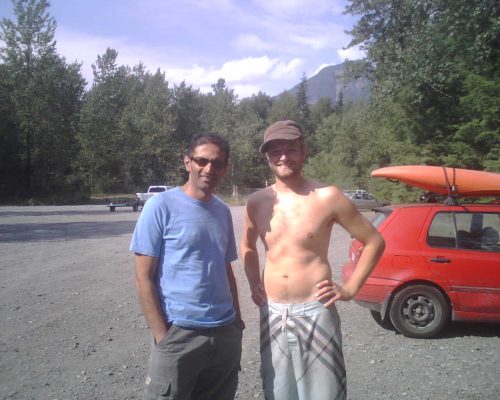 Driving up to the put-in Kiran told Stephen that he was either going to be a natural and astonish us, or a huge source of entertainment.  I said ‘Maybe both’, and to my surprise I was right.

What was really funny was that when Stephen started practicing his self-taught roll at the put-in we all looked at each other with big eyes, because it turns out he had ended up teaching himself a hand roll, and would just leave his paddle slack in the water or let go of it altogether.  It was really a crack-up, because he popped up like a duck pretty much every time – and he’s so new he didn’t even know it was a hand roll!

The first rapid after the Cabledrop put-in is probably one of the more challenging ones, and Stephen ended up missing two rolls and swimming, so he took out a bit further down and rejoined us at Split Rock for the trip down to Big Eddy.

By the end of it, however, he was so used to hand-rolling in moving water that on the last II+ rapid right before the Big Eddy take-out I watched him roll up twice, once in shallow water bouncing off of rocks, and the last time in some significant froth that plenty of beginner paddlers would have found challenging to roll up in even using a paddle.

I brought up the rear and laughed the whole way down. :) 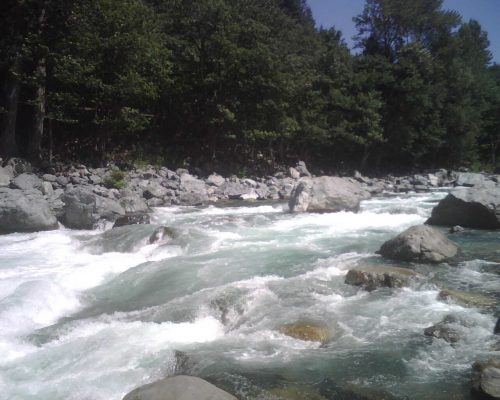 So nice to arrive at this point still in my boat.

Anyway, big thanks to Kiran for taking the time to get out at the Airplane Turn eddy on Boulder Drop and point out the lines (scouting from Airplane Turn is probably a really good idea for first-timers, by the way.)  I’d always done OK up to that point, but it was the first time that I felt like I had a clear idea of the line from there on down, even though I’ve looked at it from the bottom several times.

Between that and the cfs being about 1000 lower (at around 1500) than the first two times I tried it, it felt WAY easier, although still really fast.  And as always, a ton of fun.  Further on down Dave dug out someone’s Dagger playboat that had gotten caught between some rocks just below Lunch Hole two weeks earlier – apparently there’s a pretty nasty sieve on river left at some levels.

[…] might recall that a few months ago I posted about Stephen P., who joined us on a Class III Skykomish run after having done just a couple Class I-II runs before […]