(Updated for 2018.) OK, I’ve heard enough whitewater kayakers tell me that when they first came to Seattle they had a hard time finding paddling buddies and generally getting started, so here are some good resources: 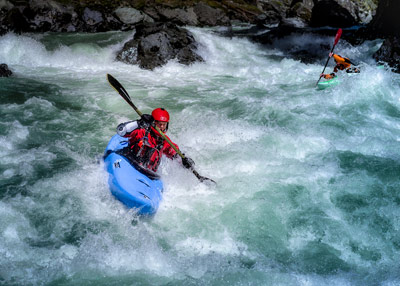 ProfessorPaddle.com (PP) is the core whitewater kayaking forum and river resource for the general Seattle area.  Here you’ll find descriptions of pretty much every river in Washington state (and the U.S.) under the ‘Rivers’ section, and a paddling forum that is visited and posted on daily by a passionate group of whitewater paddlers.  If you’re new in town you can start a thread asking to join runs, or contact people who post about doing a run to see if it’s OK if you join in.

Generally, you’ll probably have the most success finding people on PP if you’re comfortable on III+ and beyond.  That’s not at all to say that the crowd is not beginner-friendly, they are, but logistically there are just a lot more people doing IV and harder runs who frequent that site.

**Just a note about PP: It’s a great, active, super useful site with a lot of awesome local kayakers who post on it regularly. That being said, there are a number of really good, fun-to-paddle-with kayakers who don’t post on there much because occasionally it becomes a mouthpiece for blowhards. So it’s an amazing resource still astoundingly kept up by its creator James even though he is super busy with other stuff, but just know that opinions on there don’t always represent the general local kayaking community – even if no one actually replied to a thread with a well-deserved “Pffffttt!!!”

We now have some good Facebook pages that may be the easiest ways to find paddle opportunities.  Try out:

Robe Canyon Facebook Group – for the Class V Robe Canyon run (South Fork of the Stillaguamish River) about an hour from Seattle.

Washington Kayak Club Facebook Group – Probably the easiest way to reach people belonging to WKC, and typically they will be running beginner/intermediate trips. I’m not sure if you need to be a member to be part of the FB group. 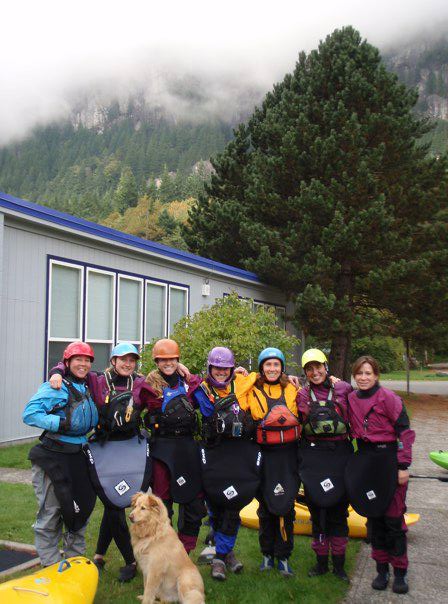 Mostly not WKC peeps but you get the drift – like this, including a dog, except usually with more men. :)

The Washington Kayak Club (WKC) is an actual club, unlike PP.  They are very beginner-friendly, and run a month-long whitewater kayaking class every spring as well as both whitewater and sea kayaking trips throughout the year, plus pool sessions from fall to spring.

The majority of runs are found not on the actual website, which shows the official WKC-led runs, but via a couple of email threads that you can get put on if you’re interested in hearing about informal runs people are doing.  Obviously you’ll want to ask to join the run and make sure it’s appropriate for your skill level, etc., but the point is that there are a lot of people going out on Class II to Class III every week.  Membership is something like $35 a year plus another $30 I think for ACA (American Canoe Association) membership and insurance.

If you are a new through intermediate whitewater kayaker, WKC is probably the easiest place to find people to kayak with.  You can feel like you’re beating your head against a wall trying to get the well-meaning but busy people on PP to take you down something relatively easy, whereas WKC is full of good boaters who are not as focused on ‘running the gnar’ and instead enjoy taking beginners and newer paddlers out on Class II to III+.  You can check out one of the official WKC runs without being a member, you just pay something like $8 for the insurance for that trip.

If You’re Going to Oregon

The Portland area has its own version of ProfessorPaddle, called PDXKayaker.org.  I’ve never posted on there but you could  try it if you’re heading that way. The one time I was down in that area by myself I missed up on meeting my Seattle area friends for a Canyon Creek of the Lewis run and two separate groups of PDX kayakers invited me to tag along with them – I ended up paddling with a huge bunch of people and it was a great day.  I’ve always thought Seattle boaters were really open and friendly to new paddlers, but if anything the PDX boaters were even more actively welcoming – I was super impressed.

You can email me via the ‘Contact’ tab of this blog and Mike and I can try to put you in touch with paddlers who are doing runs you would like to get on, or we might be able to run something with you depending on when it is.  I’ve met some nice people from Texas and Colorado that way (sorry CO peeps for the swims on Boulder Drop :).  Just understand that we are usually pretty busy with work so it’s a bit of a crapshoot.