We just got back from whitewater kayaking for 3 days in the BC area over Labor Day weekend, and seeing as I'm apparently incapable these days of posting more than once every 3 months I'm going to go straight to the useful stuff (followed probably by the usual stream of whitewater kayaking babble. :)

Also on this trip we realized how crummy we have become at taking pictures of runs and rivers.  Note Exhibit A, below. 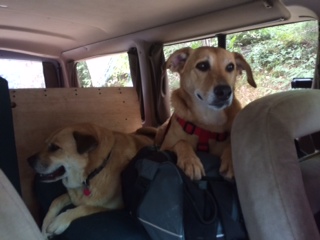 One of the few whitewater kayaking pics we took on this trip to BC.

From the LiquidLore site they will often send you to a page for flows that doesn't work anymore, but click on the 'Home' link on the gauge site and then you should be able to look up your river by name or drainage if you know it.

Another great website for runs in Canada is Fraser Valley Whitewater, which has a lot of good run descriptions and videos.

We headed up early Saturday morning equipped with 2 dogs, 2 creekboats, and high hopes.  First stop was the Upper Cheakamus, where Mike ran the entry falls (I passed) on the right side seeing as it was kind of low for a good line on the left side, just over 2.4 on the gauge, and if you don't get a good boof on that line there's a submerged hazard that can pin you if you pencil.

Here's a video (not ours) of a run on the Cheakamus.

The Cheakamus!  Lots of fun and more of my kind of river than some others (ahem - more to follow), seeing as it's quite pushy but not super technical.  We didn't scout anything and I had two flips but all went well overall, it really is quite continuous with lots of fun lines and at that level not full of rocks either.  They call it continuous Class IV but I would call a few of those drops IV+ by our Washington standards.

At the take-out we met up with Denny Lunge and Annie Lagueux, whitewater kayaking aficionados of the BC area.  They were nice enough to show us and Stewart down the Callaghan.

The Callaghan was really low (kind of under the gauge) and I think would have been way harder at higher, pushier levels seeing as it's also more technical.  As it was it felt pretty reasonable, we portaged that first 10 foot drop that is usually only run at higher water, then had good lines on the 15 and 25-footer - that last one has to be one of the prettiest waterfalls you can find.

One thing I did learn is that when you have something with a sloping start like the 25-footer it's really important to throw forward as fast as possible after the boof stroke seeing as you have less time because you're closer to the landing - I was a little bit delayed and got just a touch of whiplash feeling, nothing serious but enough to make me understand why you don't want to be late on getting forward.

(I hang my head in shame - we took no photos of the Callaghan, which is a spectacular run.  For good photos check out the LiquidLore Callaghan Creek page.)

But we did take this kayaking photo... 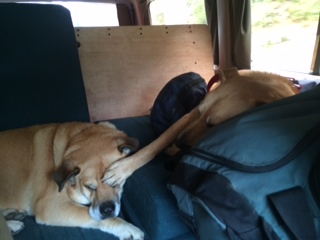 So, there was a bit of carnage.  We had all decided to eddy out above the log jam that's above Old Dirty Bastard, which was too low to run, and in that eddy I got broached against a rock, rolled up, then got broached against another rock and then flipped off of that and was scraping downstream crammed between rocks and the boat knowing I was above a log jam and not knowing where the flow would take me.

I usually hang in there and roll up eventually at all costs if I can, but in this case I was just thinking of what Mike has often told me, "If you're upside down heading towards a sieve you're better off out of your boat."  (Unbeknownst to me he was upstream screaming "Swim!!")

So I did pull, of course did not hang on to my paddle because I've never taught myself to do that by muscle memory even though I tell everyone else it's a good idea, and fortunately swam into the eddy below the log jam.

Turns out I might have ended up there anyway, but I didn't know the river and only knew there was a) a log jam right below me and then b) ODB right after that at a level too low to kayak and therefore too low to go down upside down, so it was a better call to swim.  Unfortunately my beautiful Galasport paddle (I love that paddle!) left us on that leg of the trip and didn't come back.  We got the boat back eventually, someone had a breakdown padddle, and off we went.

The Mini Mine Section of the Ashlu

We found a beautiful camp spot that night and met up with Stu the next day for the Mini Mine section of the Ashlu, which is so hard to find descriptions of!  I guess because it's a short run that at the take-out gets eclipsed by the drama of 50/50, the adrenaline-laced and optional starting waterfall for the Class V Box Canyon of the Ashlu run.

Mike ran 50/50 three times a couple of weekends before, once with an absolutely beautiful line (a couple of times upside down, like most people), and we watched some of the diehards go off it with a few gorgeous lines as well.  Ironically, as intimidating as 50/50 looks once you stand next to it and see and hear the massive torrent of water, what was more intimidating to me was the line farther downstream - several big boof ledges into boily, raucous water inside of a committing canyon - it felt kind of ominous.

The Mini Mine is really short but really a fun run as well, I'd call it solid IV although I can't remember much of it, like most runs. :) I guess most of my memories are tainted by having no idea of where I'm at or what's below, which I think adds a bit of difficulty overall.  But a good run, maybe a bit more technical than the Cheakamus.  The level was around 16 or 17 cms I think, not high.  And there's tons of time to roll up after Last Tango, the drop at the take-out above 50/50.

We found a sweet camp spot up one of the trails leading away from the 50/50 bridge, then the next day met up with Stu to do the Soo.  Ahh, my nemesis.  (The Soo, not Stu.)

I don't know how low it was, but pretty low - about the same level as in this video by Andrew Quinn that I found.  We didn't scout anything and I think the rapid that's in the start of this video is one where I missed an eddy above it and just plugged down by myself hoping for the best.  (Both Mike and I pietoned on that one, but fortunately bounced out of it.)

Anyway, to me this run was twice as hard as anything else we ran because it's technical and fine boat control is not my strong point - it was super stressful.  A beautiful river and Stu was in his element because he was all eddy-catching and swooping around - and to Mike the thing was just a big lark - but I honestly really struggled.  And again, they call this a IV but I really think some of it would be IV+ by our WA standards.

It's quite steep and there are plenty of times when you look downstream and see successive drops that you will be running alone if you miss an eddy or two.  Theoretically, hypothetically speaking.... ;)

In all seriousness, there was a drop or two that Mike said he struggled to stay upright in (and also said he was amazed I didn't flip in :) so it really can't be that easy.  It is definitely a lovely river with some awesome features and I hope to develop the skills to really appreciate it someday rather than scrabble down it bleating like a sheep.  At higher levels I think it would be full on but maybe less technical?

So that was Canada.  Good fun, we did not see any of the much-ballyhooed bears that are supposed to abound like throngs of lemmings around Whistler, and I can see why it's a big whitewater kayaking destination.  By the way, Pemberton, which is over on the Soo side, seems like a really cool town and way easier to deal with than Whistler.