Troubleshooting the Eskimo roll is one of the key things that I think is super helpful for people starting out whitewater kayaking. Here are some tips to help speed your journey.

Having a reliable roll is key, and I mean key, to having confidence and being able to have the most fun possible while kayaking. I've already done one post on the kayaking Eskimo roll and in the meantime have found some other good tutorials.

Here's a good one from Whitewater Dreams that also shows some mistakes and how to troubleshoot the roll:

Notice how in the beginning of this video starting at .48 the guy is making two really common mistakes:

1) He's "punching out" with his passive or non-power hand (the left hand when rolling up on the right).  Punching out means that instead of keeping your passive elbow hugging your rib cage, you reach out in an attempt to power through the roll, which causes the blade to drive downward and also means you're trying to roll up with just your arms.  (Notice how the guy in the very beginning of the video who's doing it right uses torso rotation to power his blade as he comes up.)

My friend Erika told me that to train herself to not punch out she spent a lot of time saying "chicken wing!" to herself as she was flipping over to remind herself to hold her passive arm in tight chicken wing style, and when I went through roll challenges a year and a half ago I did the same.  Another thing you can do is take a piece of styrofoam or anything that will fit and practice rolling while holding that tight in your armpit on that side.

2)  He's "pulling his head", meaning that instead of his head coming up last, it's coming up first.  This is a totally normal reaction, exacerbated by not making your roll, which is why I believe you have to practice the roll over and over (and over again) hundreds and eventually thousands of times in controllable conditions in order to develop muscle memory that will kick in for you even if you are going through a massive drop upside down while hitting your head on rocks. 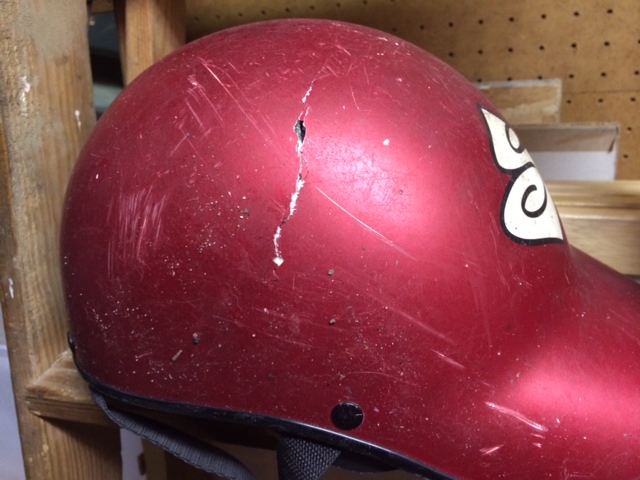 I was pretty happy to roll up after this hit on the Mokhinui in New Zealand.

I can't emphasize enough how practicing the roll and doing whatever it takes to make sure your technique is perfect in flat water is crucial, because you will need that muscle memory in order for your technique to not fly out the window in a combat situation.

Of course you also have to practice rolling in moving water, but the key to that is good technique and most peoples' rolls do deteriorate from time to time, often because of always rolling under stress.

Bottom line  - whatever your roll is in flat water, it is likely to be worse, not better, on the river. So please don't scoff at flat water practice, just realize that the goal of flat water is not to take the easy road, but to use those conditions to make your roll as excellent, bomb proof and thoughtless as possible.

If you hardwire excellent muscle memory on flat water it WILL pay off in combat situations.