OK, I hang my head in shame... I have not posted on this blog for nearly two months, and I guess it's time for me to get on it before Ollie from New Zealand writes to me again to say, "What up?" :)  Really, things have been busy.  More on that later, maybe.  In any case, one of the many things I've been wanting to post on here is the video stuff from a July 4th trip I tagged along on with Mike Nash, Sam Grafton, and Christian Knight on the Upper Upper North Fork of the Skykomish River, basically the waterfall run.  I was the videographer/dog handler, which in case it's not clear, is one of the crucial roles on a trip like this. 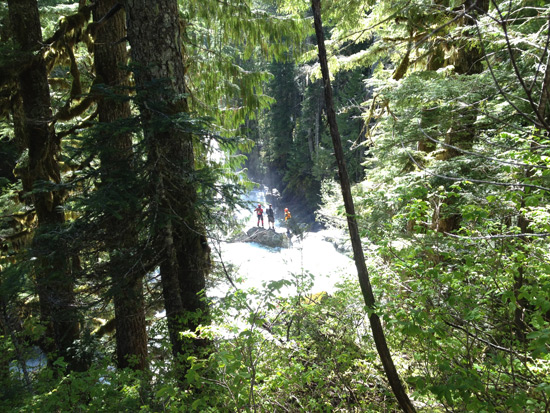 Mike, Sam and Christian check out the second waterfall.

The Upper Upper North Fork is an incredibly beautiful run that involves driving out to what feels like the middle of nowhere, then hiking up a slight grade with kayaks for around 30 or 40 minutes before putting in not too far above the first of three waterfalls.

The first one had some wood in it, but they all ran the second one and Mike and Sam ran the last one.  (Christian said the portage on the third one was so crappy that he would just run it next time.)  I'm not sure what the level was - not ridiculously high, but Christian said he had never seen it with that much water in there.

Here's the video of Mike and Christian running the second waterfall - Sam shot through it before I could get the video started.  I think it was pretty straightforward, the hard part was getting through the eddy line and clearing the rock I was sitting on.  (I have no idea where the sound is on these - YouTube, iPhone, aagh.)

Here's that same drop with the video taken from Mike's headcam.  Notice the nice boof.

I wasn't around to video the third waterfall, but here's the headcam that Mike shot.  This one was more complicated - you had to enter far enough right to avoid something (sorry, I completely forgot what but I'm guessing a rock) on the left, but then switch the angle (which happens at around .45) in order to land more left and avoid a terminal eddy on the right.

Sam got a bit too far right and ended up stuck in there - ultimately he had to get bagged out, and the final verdict was that it's stickier than it looks from the top.

Here's the first waterfall, which they didn't run because of the log spanning the lip of the second drop.

This was a super fun day even though I didn’t boat – it’s amazingly beautiful up there, I did not injure myself (this will become notable if I finish the rest of my posts waiting to be written), and I did not get eaten by anything during my hours of thrashing around in the silent woods, even though there was plenty of ‘sign’ clearly stating, “Large bear dines here frequently.” All in all, another awesome day in the beautiful Pacific Northwest.