Today I was just amazed by how ‘close’ Leavenworth and the Wenatchee River are to Seattle, even though it’s around a 2.5 hour drive.  I was supposed to get up at 5 a.m. to drive up and meet Butch and Clea for a short run, putting in at Turkey Shoot, but instead (in my defense, I was doing work online until 2 a.m.) I woke up at 6:36 exactly.

Truth be told, I did lie there for a few minutes debating whether or not to bag the whole idea, but I had a feeling things would work out and hustled out the door swiftly by 8 a.m.  Butch left directions for Turkey Shoot, there was conveniently a police arrest going on right at the spot where I got lost (I felt kind of bad pulling up to 4 squad cars and a guy in handcuffs just to ask for directions – but hey, I was lost), and it turned out to be an amazing day.

Scenery from the beautiful Teanaway area on the drive home.

The crazy thing is that nearly exactly 12 hours after I woke up I was pulling back into my garage.  Around 5 hours of driving, 5 hours on the Wenatchee River, and 2 hours of farting around car shuttling, plus hacking an inch off of my footpads with a bread knife at the put-in.  All WELL worth it.

With the Wenatchee at around 12,000 cfs, Turkey Shoot was this big, friendly fluff-pile of a surf wave that just pulled you around and made it really easy to get sideways and backwards.  The reason I know this is that I had no actual intention of side-surfing and I wasn’t actually trying  to back-surf  most of the times I ended up doing both of those things. :)

Mike Peele and I did another full run after everybody left, and it was a blast.  The waves were huge, but the river seemed easier overall than when I did it at 5,000 cfs.  (Either that, or I’m getting much better – realistically, odds are on Theory #1.)

Snowblind was a hoot with a line through the middle, and on Drunkard’s Drop Mike actually got stopped at the top of a wave and slid back down it as I blew past him.  He back-surfed it and then spun forward to ferry out of it, which is pretty impressive, especially seeing as he only started paddling last year.

We passed on Rodeo Hole, which only had a small line-up and looked like it would have eaten me for lunch.  Some of the whirpools we saw in eddy lines along the way were pretty frightening too.  Apparently Scott Richardson and a friend got caught up in one yesterday, and the people who immediately decided to not share in that experience reported seeing nothing but the tips of kayak bows and paddles flailing.  Fortunately they made it out OK, but seeing as Scott is amazing at bracing and even he thought he was going to be in trouble, I can just imagine it was pretty hairy. 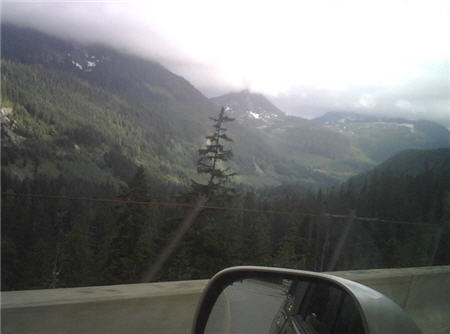 Views near Snoqualmie Pass on the way back.

Overall, I love the Wenatchee River!  It’s a III (and not a IV) for a reason.  Even though the waves are huge, they’re friendly and, at least at this level, they leave you plenty of time to figure out what to do with them.  In my opinion it’s easier than the swirly Lower Green above 2000 cfs, which is only a II+/III.

(When I worked on fishing boats on the Bering Sea a long time ago I learned that choppy 15 foot waves from a recent storm can be harder to deal with than the spaced-apart 25 foot rollers that you often get from a storm that has been going for a long time.  I’m always reminded of this when I do the Wenatchee.)

So, here’s something to consider:

In the course of a normal day 12 hours can fly by and leave you wondering what in the world you actually got done.  Days like today create memories you remember forever.

I understand it’s not realistic to take off with a kayak every day of the week, but today reminded me of how much you can squeeze out of 12 hours, and how important it is to make the effort (as in, dragging yourself out of bed after 4 hours of sleep  to arrive somewhere late) to put yourself into situations that can create those kinds of memories.  And of course it’s not guaranteed to be great – and sometimes things end up sucking – but that’s just part of the deal.

Some of my best memories are of events that, on the day I was supposed to get started, I really wanted to just stay home.  Not a bad thing to keep in mind. :) 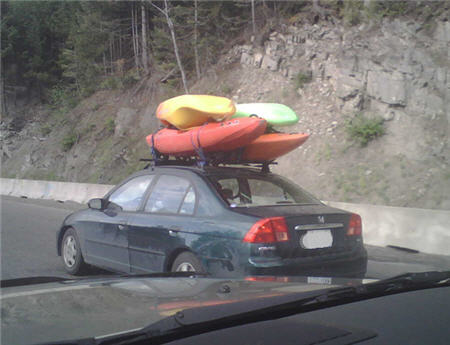 These guys get an 'A' in the 'Sure, we've got room for one more boat' department.

I was the second person in the whirlpool with Scott. It was amazing how big that thing was. I have never seen a whirlpool that would work 2 kayakers at the same time. That location is something to remember so that I don’t go back in.

I didn’t know that was you! I get freaked out by even little whirlpools, even more so after hearing that story. :)