OK, time to catch up on the myriad of blog postings I have not been putting on here.  I just got back from nearly a month in Pennsylvania and yes, I did take a kayak out with me since I drove out – I have a strong feeling that it’s just wrong for a whitewater kayaker to go on any kind of significant road trip without at least one boat on top of the car. 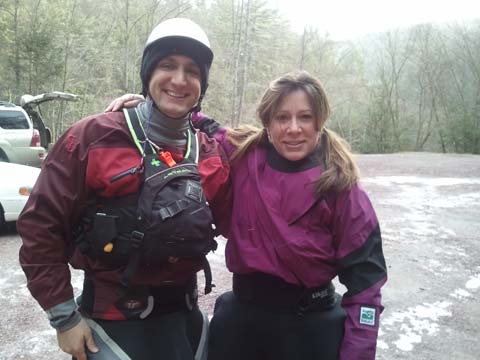 Nick LaBarbera and me at the put-in for the Lehigh River.

I had pretty much given up on finding anyone to go paddle with me when I ended up driving to Harrisburg to help out my brother-in-law, who it turns out works with a guy who has two sons are way into whitewater kayaking.  I told him about my blog, his kids checked it out, and lo and behold – not too long after that I was meeting up with Nick LaBarbera (I hope I spelled that correctly) to do the lower portion of the Lehigh River gorge on a 27 degree day in December – a ‘record cold’ for both of us when it comes to kayaking, but it was a blast! 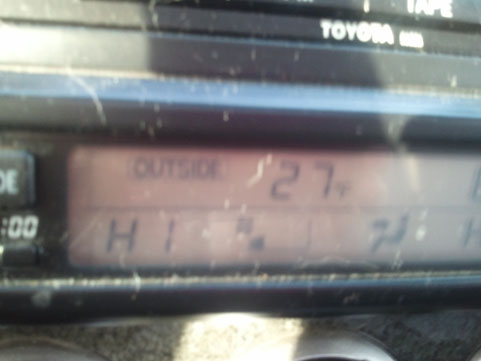 The flow was around 3500 cfs, at which level there were some beautiful surf waves, especially during the first part of the run.  I’d love to tell you that I busted moves all over the place, but a) I’m not a great playboater by any means, and b) I was kind of timid about even trying to catch waves in the beginning because I wasn’t sure how well I was going to hold up to the cold if I rolled.  I could  have relaxed, because with 8 layers underneath a GoreTex drysuit (Kokatat, I really like it), my little skullcap underneath my helmet (kayaking not being exactly a glamor sport), and Snapdragon pogies that I tried out for the first time because I forgot my trusty Glacier Gloves, I was amazingly warm even when I ended up rolling – which was, incidentally, about 3 seconds after getting onto a wave. :)

Seriously, I have to hand it to the amazing gear they make these days.  I was just thinking how surprisingly warm I was even with the wind when I realized icicles were forming on the brim of my helmet.  It was a blast!  Nick says he raft guides on this river all summer and that the flow is typically 700 cfs – it’s hard to imagine what it’s like at that level.  Anyway, much thanks to Nick for braving the cold and guiding me down, it ended up being around Class III with a few monster holes, and at that temperature the danger level bumps up on any river. 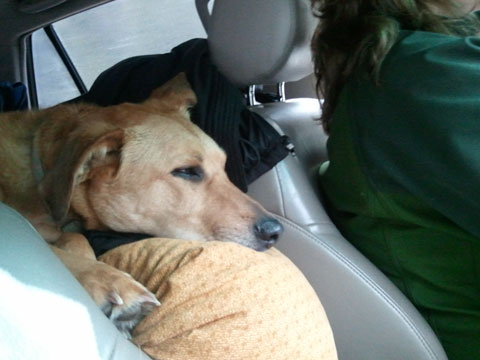 Since I’m mentioning the road trip and it has also been a while since Libby made it onto the blog, I’m going to give her a big vote of appreciation because she is the ultimate road warrior dog – unbelievably patient, fun to snuggle with in the back when the other person is driving, and she managed to fart only minimally for most of the trip. ;)