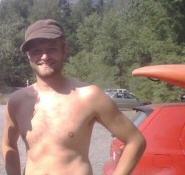 You might recall that a few months ago I posted about Stephen P., who joined us on a Class III Skykomish run after having done just a couple Class I-II runs before that, and who amazed us all by having a self-taught roll that turned out to be a really good hand roll (he would just ignore his paddle or toss it completely.)

Well, about a month ago when the Sky was still pretty low I was getting out at the Split Rock take-out when I thought I saw a familiar face pulling up and there was Stephen, getting ready to do laps of Boulder Drop with a friend.  It totally cracked me up because I asked him what lines he had been taking, Airplane Turn or through the Needle, and he just goes, ‘Umm, I don’t really know the names, I’ve just been going around that one big rock and past that other one…’  With all the analyzing and sweating that most people (myself included) do over that rapid I just love hearing that someone simply shleps down there and runs it.

Anyway, thumbs up to Stephen, he’s apparently progressing at the speed of light.  I think he’s even finally taught himself a paddle roll. ;)