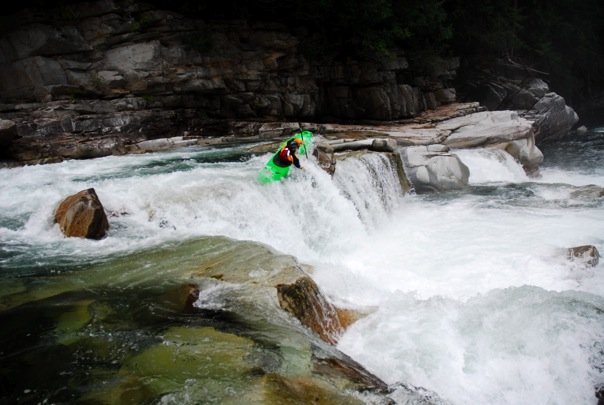 I’ve been thinking about what I’d tell someone who was starting out whitewater kayaking and wanted to learn fast.  One of the most useful things that I’ve been fortunate enough to do has been to paddle with people who love kayaking, are really good at it, and who are really generous with their knowledge.

I learn much faster when I’m with people who encourage me into into stuff that is a bit over my head, even if it means messing up and swimming.  It just makes you choose your line more carefully next time, or work on a stroke that will steer you away from trouble someday, or learn to roll up in squirrelly water when you’re scared.  Or, on special occasions, all of the above, all at once. :)

(I’m not talking about people who put you in unreasonably dangerous situations, obviously, just good paddlers who help you stretch your limits.)

Anyway, I don’t have pictures of many of the kayakers who have helped me out with advice, but here are some cool shots of a few, starting out with Brett Barton, above (actually messing up on the line on Eagle Falls in that photo – but it makes for a great shot.)  Brett is a great playboater who has shown me a ton of lines on Boulder Drop.  I actually was the safety throw bag person on the Eagle Falls run, but seeing as I have an unfortunate habit of getting nervous and throwing the safety throw bag sideways into the tree tops it’s a pretty good thing he nailed the run both times. 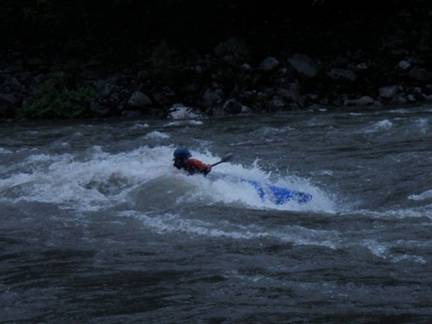 Brian Pernick on the Skykomish River

Brian Pernick, above, is my unofficial attainment coach.  (This may be news to him, I realize.)  Up until a few weeks ago I didn’t know what an attainment was, but it’s when you find ways to move your kayak upstream, sometimes finding your way through rapids.  Brian is really good at it, and I end up trying some of the same moves he’s doing.  Practicing attainments is not just good for the physical aspect of kayaking, it also puts you in a more proactive mindset where you’re more likely to think what you can do with the water rather than what it’s going to do with you. 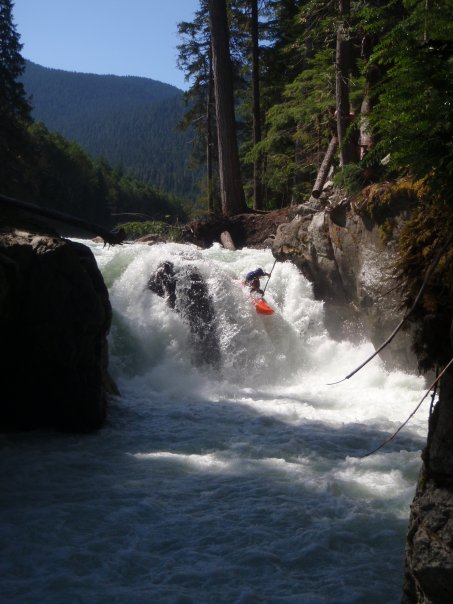 Chipper Maney on the Cheakamus River, BC - Photo by Preston Brown

Chipper Maney, demonstrating a nice boof stroke above, is another really good boater who notably picked a really fun line through Boulder Drop yesterday, finishing up with a fun little auto-boof at the end that I actually got a good boof stroke on the first time down (possibly my first actual boof stroke ever.)  I’m not sure what river he’s on here, but I love this shot.

There are a ton of other good boaters who have helped me learn, including Charles from AquaSports – who is super encouraging, but who was also nice enough to let me know that I need some work in the eddy-catching department (so true!)

Overall, I feel incredibly fortunate to paddle with the people I kayak with – they give great advice without being bossy, test your limits without making you feel like they’re trying to kill you, and no one ever makes you feel bad if you decide to not do something.  And, they love to be on the river – what could be better?

Great post and thanks for the compliment. It has been really fun paddleing with you the last couple months, and your enthusiasm to progress should be an inspiration to any boater. I agree that paddling with people who are better than yourself is the best way to learn. This is how I’ve made it to where I am now (which is not very far), and I am more than happy to pass on whatever I can.

I will humbly accept the position of attainment coach, but only because there are not many people in this part of the world who do it.

Keep up the good work, and I’m looking forward to exploring some of they many rivers we have here(upstream or downstream).

Thanks Brian, glad you liked the post! And you are indeed a fine attainment coach – I got a ‘nice attainment’ from JP on Sat. and I told him it was your doing. :)