Whitewater Kayaking Classes Around Seattle in 2016 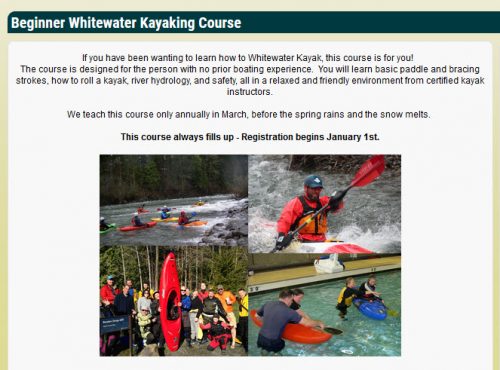 It’s that time of year when late winter rainstorms, grey weather, and general clammy chilliness irresistibly draw the unwary future whitewater kayaker from hibernation and onto the Internet in search of whitewater kayaking classes.  Well, there are a few coming up around Seattle this spring and summer of 2016, so don’t miss out – these are the ones I know about:

Begins March 5, 2016. Every weekend in March, ranging from pool sessions where you learn how to roll to river days teaching you how to get comfortable reading and paddling very easy whitewater. Cost is $250 and you can get very discounted gear rental from Kayak Academy if you’re taking the course.  I’ll be helping out on a few classes but don’t let that stop you. :)

I’m not familiar with their classes but here’s their class list. Costs range from around $220 to $450 for a 2-day class depending on what you’re doing.

This is the 6-session class I took way back when and I really liked it. Like the WKC class they teach you how to roll and to paddle and handle yourself in easy whitewater. It’s $250, plus up to $100 for gear rental if you need it. They offer separate courses in April, June, and July 2016.

NWOC also has a Total Immersion 5-Day Whitewater class, which is $795 including everything.

The only two classes I’m familiar with are the WKC and NWOC ones and I think they’re both good. If committing to a class every weekend in March would be tough for you, then you’ll probably find the NWOC scheduling easier since at least 3 of those sessions are in the evening.  The nice thing about the WKC is that they have a great network for beginners and they run trips throughout the year, so in addition to the trips that are scheduled on the site you’ll probably find yourself connecting with other students who want to paddle after the class is done.  That being said, you can always join the WKC later for $35 a year ($40 for a household) and participate in their activities anyway.

Regardless of what class you take, a lot of your future progress is going to come from self-learned material, and in my opinion it’s a good idea to start with that before a class even begins. One of the most important things you can learn to do correctly early on (and that normally people don’t talk about much in the beginning because they’re trying to not overload you) is simply the forward stroke – having a strong, powerful, efficient forward stroke is the key to getting where you want to go in control – and, trust me, this makes kayaking much more fun. :) I sometimes see people who have been paddling for a few years trying to get into harder III or IV who are hunched over in their kayak, paddling ‘hard’ but not using their core at all for their stroke and not driving their kayak with their feet. A lot of times they are frustrated with their lack of progress and sometimes also not too keen about continuing to kayak, which is totally understandable.  Inexplicably, a lot of times they have been taught by their significant others who are master kayakers who don’t paddle like that at all.  I don’t get it! But I digress.

This post has a great how-to video on the forward stroke by slalom kayaker and creekboater Michele Ramazza.

This post has a second video on good paddle stroke techniques by Whitewater Dreams.

Developing a good forward stroke is not as easy as it may sound – most paddlers who think about it work on it constantly. And to be clear, this isn’t some fru-fru detail that the ‘gnar’ boaters think is silly – it really is a key component of being able to manage difficult whitewater. It’s still easy for me to fall back into old habits in harder water, but that being said, really concentrating on this over the past couple of years has improved my paddling significantly. I just wished I had learned earlier what I should have been working on. (Thus the long addendum to this post. :)