Whitewater Kayaking Classes Around Seattle in 2013

Spring 2013 whitewater kayaking classes are gearing up around the Seattle area.  If you’re thinking about plunging into this ultra-fun sport, here’s where you might want to start out:

The Washington Kayak Club Beginner Whitewater Course starts March 11 and goes to April 6, 2013.  Cost is $175 for WKC members, $255 for non-members.  It’s for ages 16 and up, with a parent participant required for students 16 to 17.  (You will find people of all ages in this class, just so you know – the great thing about whitewater kayaking is that you can take it up later in life, after you’ve quit Australian rules football and professional gymnastics.)  As per the WKC, “You will learn basic paddle and bracing strokes, rolling a kayak, river hydrology, and safety, all in a relaxed and friendly environment!” 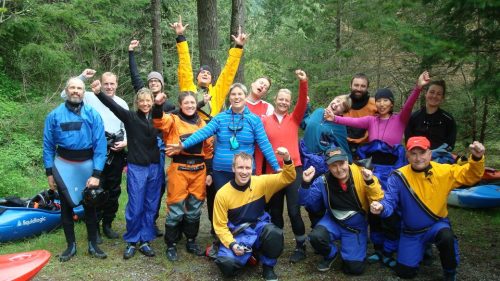 Pros:  Taught by nice, competent people, and membership in the WKC means that you are in the loop with a bunch of people who are very good at organizing trips for Class II, II+, and III boaters – which can be a struggle to find when you’re looking to get out on the river after a kayaking class and everyone you know is either a non-boater or getting on stuff that’s harder than you’re up to.

Cons:  , which can be a challenge when you’re new enough that you’re not sure you’re going to stay in the sport and/or don’t know what to buy.  (Craigslist is your friend here, but I understand that you also need to know what to look for.)  Update:  Since I wrote this I heard they have a gear rental arrangement with Kayak Academy for class participants, which is awesome news. 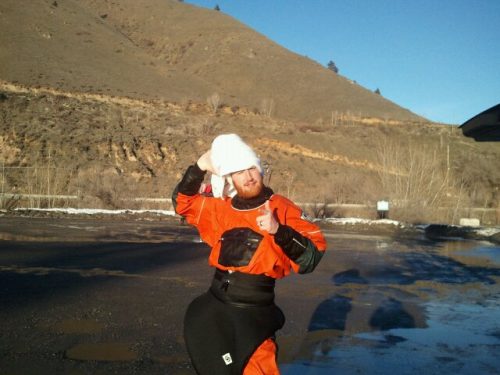 Gear-wise the towel is technically optional, although it’s clearly crucial to pulling off whatever’s going on here.

Pros:  Also taught by nice competent people.  Since this is the class I took way back when, I can tell you that Herbie (one of the co-owners of NWOC) is really, really good at teaching the roll, not to mention one of the most laid-back people you can find anywhere.  I will say that if you’re in one of the two roll classes and are not getting the roll, ask Herbie to come over for a troubleshooting.  After getting the roll during the class in like 2000 I then didn’t kayak for around 5 years and after that, realizing in my friend’s pool (with nobody around – not the smartest thing) that I no longer could roll I went back to a NWOC roll class.  The person helping me couldn’t figure out what I was doing wrong, but Herbie came over and adjusted my non-power hand elbow angle just a bit (I was holding it too far out from my body, so digging my blade too deep) and all of a sudden I was rolling again.

Another nice thing about the NWOC class is that you can rent gear, which alleviates an up-front expense and helps you get a chance to figure out what you like and don’t like.

Cons:  NWOC doesn’t run a lot of post-class trips, so it’s not like you’re necessarily hooked in with a lot of people you can easily run rivers with.

Some thoughts:  I took the NWOC Whitewater Fever class, then (after 8 years off the river) joined the WKC.  The WKC kayakers were integral in helping me build my skills on Class II and II+ rivers, and I still recommend them to everyone I can.  I’m always kind of surprised when I hear people complaining about their Class IV and V friends who don’t take them on beginner runs often enough.  With pretty much everyone working a lot, kayaking time is at a premium, and while most decent boaters have good intentions and will take the time to help out newer boaters when they can, it’s kind of a tall order to ask them to run a lot of the kind of trips that make it easy to dig a Class II boater and their gear out of every other eddy.  That’s kind of exactly what the WKC is great at, so why not let them do it?  The $65-ish that you cough up for a yearly WKC membership and American Canoe Association insurance is basically an investment – an excellent investment – in a huge part of your future.  So regardless of what class you take, I highly recommend the WKC for building your skills afterwards.

When you’re getting through and past the Class III stage you’ll probably find more trips on the Professor Paddle website.  Although I should warn you, you’re likely to end up boating with people like this: :) 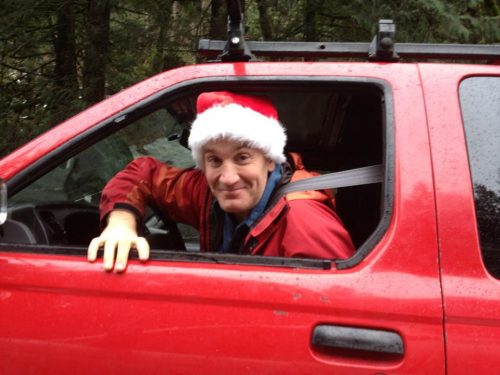 Rob McKibbin – Paddling powerhouse (seriously – just click the link and watch the video) and also one of the nicest guys on the river.

Good luck – if you have any specific questions drop me a line.

Update:  Since I wrote this I added a Kayaking Classes link to the sidebar and included Outdoor Adventure Center and Kayak Academy.  Both of those places have really experienced kayak instructors, I just didn’t write about them here because I don’t have personal experience with the instruction part of those companies.  If you’re reading this chances are you’re a newer paddler, so I’ll just point out that Kayak Academy lots of times has specials on drysuits.