Whitewater Kayaking Classes Around Seattle in 2010

I was surfing around some of the Seattle area whitewater kayaking sites this morning and was reminded to give a shout out for a great beginner whitewater kayaking class offered by Northwest Outdoor Center, it’s the Whitewater Fever course that I took nearly ten years ago and I highly recommend it. 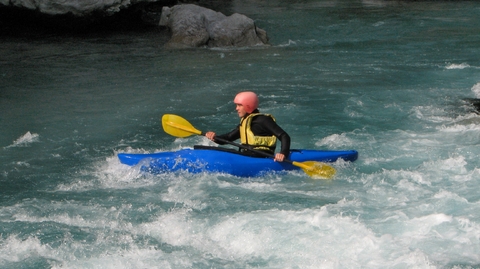 Classes start you out on friendly Class II whitewater.

(Don’t be like me and then do a total of three river runs over the next eight years before you actually get into it – oh, the time I’ve squandered!)

There are four courses coming up, in April, June, July, and August 2010 – here’s the link to their course calendar page.  It’s an easy-to-take class, with four evening classes and a total of two river days on separate weekends.

One thing I love about how Herbie, one of the NWOC owners, teaches this class is that I think they do a really good job of teaching the Eskimo roll.  I got mine during the class, and years later when I hadn’t gotten into a boat for a few years and suddenly realized I had lost my roll (trying it alone in my friend’s pool – in hindsight, not too smart :)) I went back for a roll class at NWOC and Herbie fixed it.   Notably, this was right after an instructor at another company’s roll session had told me I needed a different boat (even though I had learned to roll in that boat!) and then even one of Herbie’s own instructors was having trouble fixing it during their roll class.  Herbie waded over, said “Oh, you need to adjust your elbow angle by like 12 degrees”, and bam, I was rolling again.

So if you’re working on the roll, just remember you might get mixed advice, and it’s not a strength move at all.  I highly recommend Eric Jackson’s Rolling and Bracing DVD, which shows beginner moves and then advanced moves that help you transition into rolling up in any kind of water.  I’ve obsessed on the roll for the past year and a half and have a really strong one now, but even just watching that video a couple of months ago taught me some stuff that has helped me transition into not having to do a traditional setup for every roll.

Anyway, I wanted to also mention that the Washington Kayak Club also has whitewater kayaking classes, I don’t think they have as many as NWOC and the difference is that you’ll need to come up with your own gear, but I know that Charles at AquaSports in Redmond has some kind of special deal for you if you’re taking the WKC class.  I couldn’t find a link to the class on their site, but you can contact them through their website, www.washingtonkayakclub.org. 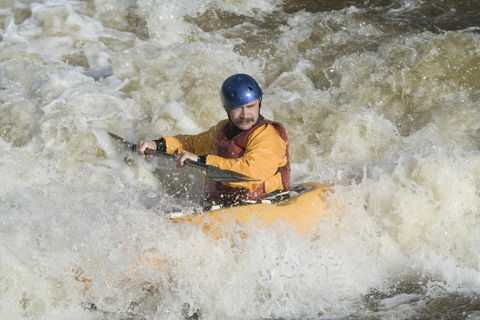 After the class… look at you, you rock star! :)

Update:  I checked my WKC newsletter and their class is halfway through already, so go ahead and check with Northwest Outdoor Center about their classes.  (Tell Herbie I said ‘Hi’ – just be warned that he may have no idea who you’re talking about.)