A Good Forward Stroke Is Your Key to Kayaking

The great kayakers winning extreme creeking races in big, technical whitewater all have a powerful forward stroke fueling their moves. It's the key to virtually everything that gets you where you want to go in kayaking, including the boof stroke.

But the forward stroke gets overlooked when people are learning because it seems like a no-brainer, and because the focus is usually on running harder stuff instead of focusing on a technique that we tend to think we nailed on the first day.

This video by slalom kayaker and creekboat racer Michele Ramazza is fantastic. I've posted it on here twice before but some people haven't seen it so I'm posting it again. I wish I had watched this my first day kayaking instead of six years into it.

** Notice how much he uses his feet and legs to propel the boat forward. This is super important - paddling is almost not so much about the arms as it is about torso and pelvis, which translates to the legs. I find that when I'm in the groove and paddling strong it's partly because I'm remembering to imagine my boat as a missile propelled forward by my feet.

This means your core needs to be strong and connected so that your feet are delivering the energy generated by your torso, pelvis and legs.  To be clear, when you pull back with your right blade it's your right leg that should be pushing forward, driven by the rotation of your pelvis.

He goes into a lot of detail here but please don't get overwhelmed - I think two of the top concepts to take away in the beginning are how to paddle with your torso and pelvis, and using your legs to deliver propulsion. Trust me, you can paddle for years without having anyone point this out to you, and it will make a huge difference. 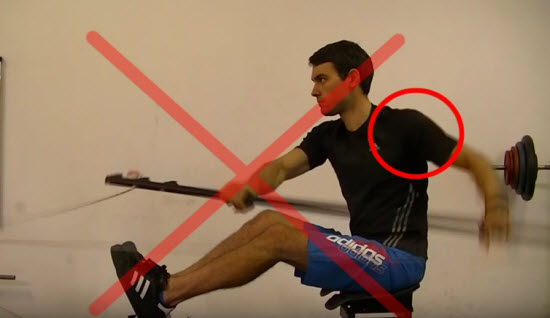 Example of what not to do, from Michele Ramazza's video

Basically, unless you have a slalom background, the forward stroke is the one thing you are least likely to have been taught correctly, if at all.  (Seriously - paddling Class IV and even making it down some Class V doesn't mean someone has a strong forward stroke.)

I can't tell you how many times I've seen beginner kayakers told to "practice breaking out of the eddy into the current" - but no one taught them how to paddle forward effectively in the first place! So they barely have any speed or momentum, and trying to use their boat to carve across the eddy line into the current is like someone on skis trying to practice their carving turn in a Kmart parking lot.

Without speed you can't use the dynamics of your boat, just like you would not be able to carve going 3 mph on skis. It is so frustrating to watch.

The same goes for many hapless Significant Others I've seen, coached by really good kayakers who should know they have a vested interest in having a mate who doesn't end up hating the sport. (Because kayaking is scary enough to begin with, and when you can't get where you want to go and then can't get out of where you didn't mean to end up, it can be downright horrifying.)

Don't ask me why someone who's dating a strong Class V boater can, after three years, paddle like they have spaghetti for arms - but I see them out there, battling to make moves and often feeling defeated, inept, and demoralized.

How much fun is that? And again, it's not their fault - they have no reason to know better, and you would think people who know how to paddle strongly would pass that on. But they often don't.

World Cup Champion Scott Shipley's drill has also been super helpful to me - I highly recommend getting a copy of his book "Every Crushing Stroke".  It's an amazing story (he is a 3-times World Cup slalom champion and lived in an unheated treehouse in Canada during training), and honestly for me the book would have been worth it just for the explanation of the forward stroke and the drill that's on page 26. 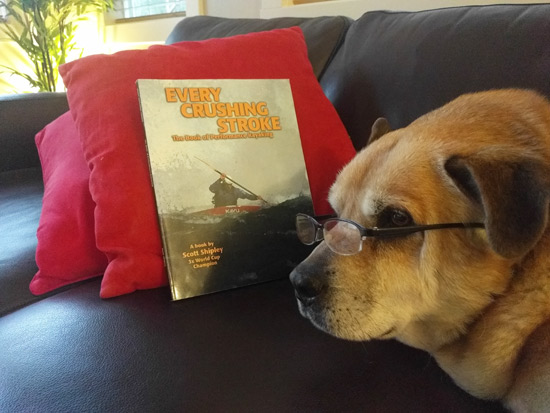 Scott Shipley says, "A good forward stroke is powerful only if you are using your entire back, shoulders, torso, legs, and arms at the same time," and explains how he learned the hard way that the traditional stroke technique he was taught was not the best stroke for whitewater slalom. As he explains it:

His flat water drill can be done by anyone and consists of exaggerating four things separately in sequence and then combining them in a certain way. I'd love to post it here but it's part of the book and I'm pretty sure that wouldn't be OK.

Bottom line: This stuff is not frou-frou detail that gnar Class V boaters scoff at, it is actually the reason they are as good as they are.  And fortunately it works for all levels - these are drills you can practice on flat water, not boof strokes or waterfall landings or playboating moves.

Working hard on Scott Shipley's flat water drill a few times transferred directly into feeling stronger and paddling better on Class IV for me - even to the point that Rob mentioned I was paddling great and keeping my elbows in. Before reading the book I didn't even know you were supposed to keep your elbows in, and I sure never expected Rob to notice it. (Rob is a fish and does everything on and in water naturally.)

Also, I found that just one afternoon with awesome instructor Craig Allen on not even Class II on the Chilliwack B.C. slalom course doing basically two moves in my creekboat - super easy water but trying to be extremely precise and hit the exact same spot under the gate each time (way harder than it sounds) helped me be surprisingly more competent on a low-water technical Class IV that Mike and I did shortly afterwards.

Usually technical stuff is the kind of thing that makes my teeth chatter, I'm way better at plowing through bigger water than catching tight eddies - and I found it amazing that what I learned from a few hours of trying to be super accurate on easy water gave me noticeable results on a significantly harder river.

So, if you want to be a strong whitewater kayaker, my best advice is to learn and work on a strong forward stroke as much and as early as possible. I don't think it's possible to progress very far without it. Then use it to practice breaking across eddy lines, making ferries, catching eddies and making attainments.

And if you have access to any kind of slalom practice or instruction, GO FOR IT.

Slalom is to whitewater kayaking what gymnastics is to parkour. There's a good reason why a lot of the paddlers winning extreme creeking races have a slalom background.

Regardless, whether your ultimate goal is to enjoy yourself on Class II+ or on Class V, it's always more fun to use form that helps you make moves and feel confident.

Disclaimer - I have by no means mastered these skills and do not expect to make the cover of Kayaking Technique Magazine anytime soon. (Although if I do, I hope it's the prized Dirtbag Paddler edition. :) But I work on them regularly and am for sure a better kayaker and enjoying myself more as a result.