It was December of 2008 that I splurged on my Kokatat Tropos drysuit at Kayak Academy (a great deal for around $500 on sale), knowing that it was my only ticket to getting out on rivers during any kind of cold weather.  After 200 rolls in the pool that month I joined the Washington Kayak Club for a New Year’s Day paddle on the Lower Green River (thank you Dave Bowman for patiently leading me through the snow to the easier entrance at Kay’s Landing), nailed two combat rolls, and was “in” for the long haul.  Seeing as I’ve met many of my close friends and my husband paddling, I have to say it was a decent investment. :)

Anyway, fortunately I got some good advice before picking my suit, and I thought I’d pass it on.  Keep in mind that if something else works better for you, then that’s the best option.

Buy a Drysuit with Dry Socks 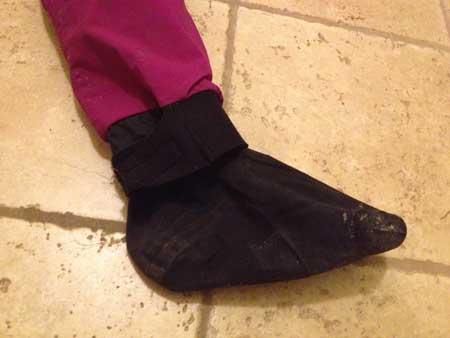 The dry socks on my suit are made of a thin material that has a papery feel and they are way bigger than my feet (they are made to fit loosely).  The advantage of dry socks is that you don’t have to deal with getting your feet in and out of ankle gaskets.  Considering the time, effort, potential for the ankle gaskets to break, and the addition of another water entry point with gaskets, I highly recommend going the dry sock route.

Get a Drysuit with an Overskirt 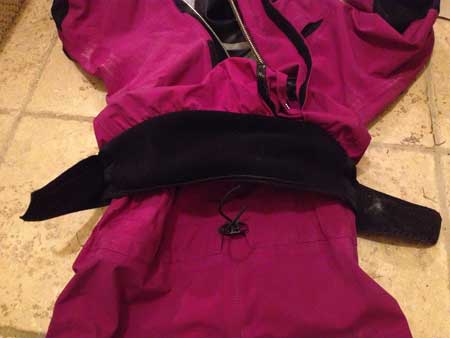 The overskirt is an extra flap on your drysuit waist that goes over the tunnel of your sprayskirt.  Unless you’re sea kayaking or paddling flat water on which you don’t expect to do a lot rolling (and if you’re planning on whitewater kayaking, please plan on doing a fair amount of rolling, or else a fair amount of swimming – it will be one of those two), then you’ll be very happy if you get a drysuit with an overskirt.

Don’t Get a Drysuit that Zips Along the Back

I have friends that use Palm drysuits and I have nothing against the brand personally, but when your drysuit zips up across the back of your shoulders you’re pretty much dependent upon having an able partner with you anytime you put on or take off your drysuit.  If you’re not already the kind of person who gets mildly claustrophobic just thinking about that, then consider that you might want to do lake practice on your own one of these days, or your faithful paddle buddy might end up with dislocated shoulders mid-river and gee, wouldn’t you feel silly if you weren’t able to save the day and/or pee when you needed to just because you weren’t able to zip up or unzip your drysuit on your own.

When In Doubt, Go Big

I have a drytop that I’m giving away because getting into it is like squeezing into a sausage casing.  (Still better than the drytop that while I was trying it on I had visions of being found weeks later by emergency responders, suffocated by the gasket in the basement.)  Basically, if a suit is too small it can hamper you, but if it’s a bit large, who cares?  You may end up paddling in very cold weather, and a larger suit gives you the option to put on multiple layers and still feel comfortable.

Test Out the Drop Seat Zipper

My drysuit has a front relief zipper, but a lot of women use the drop seat zipper.  The one time I tried a suit like that I couldn’t even sit comfortably in the boat, so if you want a drop seat zipper I recommend sitting in a relatively snug boat with the suit on first.  A lot of women wear them happily, so you never know.  If you go with the front relief zipper you’ll also want one of those things like the Whiz, which Kayak Academy was nice enough to give me to try out but I never did and ended up giving it someone who ultimately reported that on her first test run she peed into her drysuit.  Although I think the verdict was operator error.

I think that’s about it, except for: don’t feel like the less expensive Tropos drysuit is a huge trade-off.  It may not be true Gore-Tex, but my first drysuit was a Tropos made by Kokatat, and even though it’s supposed to be less breathable than the higher end Gore-Tex one, the main difference I noticed is that the Tropos is less heavy-duty material.  It served me well in very cold weather and a few slides/tumbles down to the put-in, and more importantly, at around $500 on sale it was the vehicle that got me out on rivers during a time of year when you really need a drysuit in WA – which is the whole point, right?