My Review of the Jackson 2Fun – TOO Fun!

I demo’d the Jackson 2Fun the other day and it was so great I don’t even think I need to demo another boat.  (OK, update as of August 2009 – read my review of the Wavesport Fuse 48.)  I’ve been paddling a Necky Jive ever since I started kayaking, which was pretty much a year ago except for 3 or 4 river trips.

The Jive is a much longer, heavier type of river runner boat that’s a great beginner boat and supposed to be excellent for ocean surfing, but on shorter river waves I was always getting the nose whipped around.  From the photo below comparing the two you can easily see why: 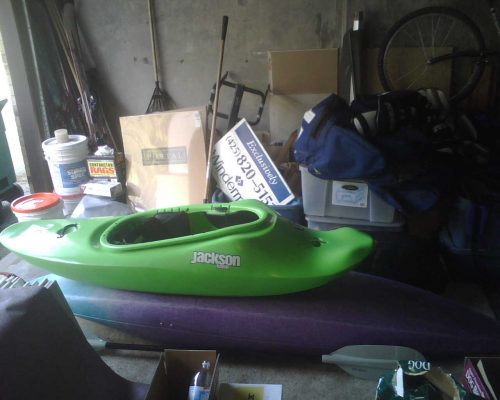 I took the Jackson 2Fun on the Lower Gorge and the Headworks sections of the Green River – here’s my take on it:

From what I heard about moving from the Necky Jive to more of a playboat style like the 2Fun I expected to be getting flipped over every time a wave hit me sideways.  (I’ve got a really good roll but am more or less not so great at bracing.)

Instead, I could not believe how forgiving this boat was.  The stern is a litle bit more grabby, but overall once I got used to the edges I was able to get away with pretty much what I can do easily in the Jive.  This was totally not what I expected (and a huge relief.)

I also sit a bit lower in this boat, which made river reading a bit more difficult, but bracing easier.

I didn’t use the optional soft seat because I wanted to not sit too high – it would probably be fine, but I was comfortable without it.  I know I didn’t adjust the inflatable footbags as carefully as the Jackson people explain how to, but I felt like I had decent foot support without it.

The back band is really adjustable and I felt like between that and the shape of the boat I was able to use a much more forward stance than in the Jive.

The 2Fun was a blast to surf in – in fact, after paddling like crazy to surf with the Necky Jive (and burying the nose and getting whipped around constantly), it was amazing to actually get onto a wave and, well, just surf!  The edges were easy to use once I started trying.

Let’s just say I was able to do 2 or 3 actual vertical stern squirts, my first ever.  I only got one out of every 10 or 15 attempts, but that’s not the boat’s fault.

The Jackson is super easy to roll, so much so that I actually flipped all the way over coming up from a roll.

After lugging around my 40 lb Necky Jive for a year, the Jackson 2Fun is like picking up a purse – amazingly light.

I felt like it was easier to get a good line with the 2Fun because it’s lighter and easier for me to move sideways across the water, plus it’s a bit slower than the Jive so I had more time.

Libby’s Review of the 2Fun

Now down to the important stuff.  Libby’s not wild about kayaks in general (because a paddle usually means she has to stay home) but she gives the 2Fun two paws up due to it taking up much less room in the back of the car: 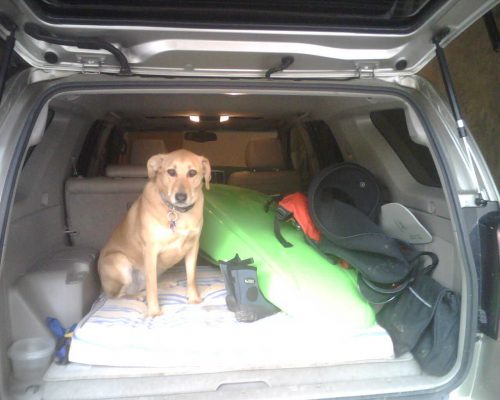 It also fits her pretty well, although I can definitely see she’s going to have trouble getting the skirt over that tail. 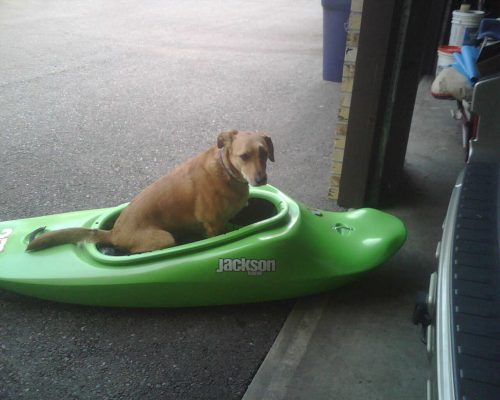 I was seriously shocked at how easy and versatile the Jackson 2Fun was.  It’s so forgiving that I think it would be a fine boat for a beginner, although I should mention that I really haven’t tried many of different boats.  I do know that I didn’t notice a huge difference in stability between the 2Fun and the Necky Jive, which is supposed to be a very good beginner’s boat.