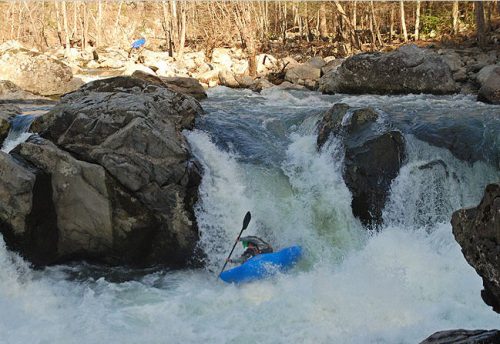 Leland posted a link on Professor Paddle to his nice review of the 2010 Pyranha Burn, here’s a link to his blog post with the entire Pyranha Burn review on the River Gypsies website.  There are a lot of good photos and he goes into quite a bit of depth about the various paces he put the boat through.

To my unschooled eye it’s hard to tell much difference between the old and the new version, but he and some commenters on the Professor Paddle thread definitely seem to be able notice them.  I think it’s pretty hard to go wrong with the Burn overall, Charles from AquaSports in Redmond says it’s the one boat that in 15 years he’s had only one person return because they didn’t like it, and everyone seems to rave about it as a creekboat.

After doing Tumwater the last two weekends I can definitely say I learned to fall in love with my previous-version Burn, even though I’m still portaging POW and man is it a pain to lug around!  Yesterday I was definitely weighing the disadvantages of possibly losing a tooth on that rapid versus the hassle of dragging the Burn up and over boulders on the river right portage – which is actually even easier than the perilous scramble down to the river if you do that portage on river left.  The tooth won out, but it was a close call….

Anyway, in the past I’ve gotten a little resentful taking the Burn out on the Skykomish to get used to it because I love to do that upper run in a playboat, but as soon as I got on the Tumwater run I loved it.  Mike Peele, who did Tumwater for the first time with me the previous weekend had the exact same reaction about his Burn – we kind of looked at each other at the same time and said, “I love this boat!”.  Although, a lot of people do that run in playboats (and Rob McKibbin of course makes bobbing blithefully down Class V+ Exit rapid look easy in his Dagger Kingpin).  But he’s around to keep the rest of us humble. ;)