Back in early April 2009 the Northwest Whitewater Racers held the WKC Cedar River Race at the Cedar River Gates near Landsburg, WA.  I stopped by and took some photos before the event while people were warming up.  (I’ve tagged this post with the names of the people whose names I recognize from the WKC list who I think were there.)

I was really impressed by the canoeists – that looks twice as hard as trying to maneuver a whitewater kayak around those gates.

There was also a display by Keen Footwear.  The guy there (whose name I of course have forgotten) was nice enough to give me a couple of pairs of socks to try out, one of which were these. 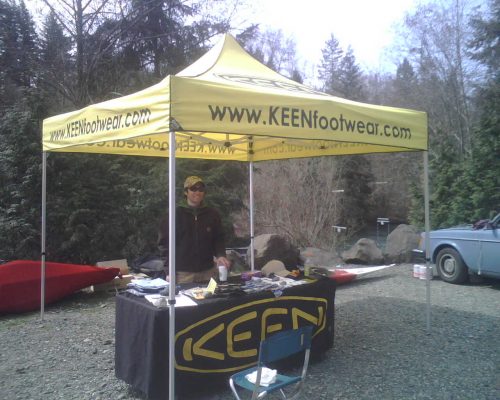 I have to say both are great, the one thing I should point out is that the sizing appears small, so the ones that fit the best are in the size range above what I would normally take.  But other than that – two thumbs up on the socks, especially since the ones I’ve been using are these lame-o cotton ones.